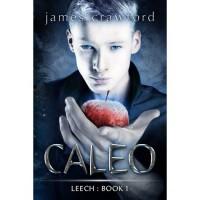 I was asked to review this book by a friend of the novelist and downloaded this on to my Kindle a week ago.

Caleo tells the story of a boy who is treated as a freak by his classmates for his pale skin and hair. He finds out from a mysterious stranger that he is a "Leech" – a human with a gift particular to that person only. In Caleo’s case, if his life is under threat, he can freeze the air around him.

Other Leeches have found out that Caleo’s skills are not yet fully developed, and his energy presents an opportunity for them to take advantage of this and claim his gift for themselves. Thus, Caleo finds himself in a situation where he really doesn’t know who to trust – even those purported to be acting on his best interests are a threat, and all on the eve of a vicious civil war between other Leeches into which he is reluctantly forced to get involved.

I was asked by a friend of the novelist to review this book and really wanted to enjoy the story as I’m always keen to support indie authors.

Unfortunately, there are a number of errors which detracted from the reading pleasure – in some instances, the writer moves from the third person to first person (for example when describing a game in the orchard), and the introductory scenes with Caleo’s mother and father are very fractured and seem under-developed. Added to this, a number of grammatical errors fill the novel, which an editor should have identified and I found that these spoiled what was otherwise an interesting read.

However I am sure young adults will overlook these elements and enjoy this opening novel in what should be an exciting series.